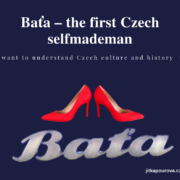 We have been wearing Baťa shoes for more than 120 years. On the 21st of September 1894, three siblings founded a small shoe company Baťa. But soon, it became a large shoe empire. Baťa shoes – that´s a brand and Baťa was the first Czech self-made man.

On the 21st of September 1894 three siblings – Tomáš, Antonín, and Anna Baťa – founded a small shoe company in Zlín town. It wasn´t typical, at that time most shoemakers included their father, usually worked as „freelancers“. They didn´t have much money. But soon, their company became larger – people were interested in their shoes, they were cheap and easy – and more and more employees worked there. In 1904 they produced 2 200 pairs of shoes daily and in 1917: 2 million! Tomáš Baťa became the only boss of the company.

Baťa is also a symbol of progress. The boss himself went abroad to work there and learn new procedures and methods. He´s called „Czech Henry Ford“. In factories, he installed modern machines, taught people new ways of work, built houses and hospitals for them not to live far from work, he took care of culture life… When an employee came with a good work idea he/she was rewarded. Each company department was completely responsible for its effectiveness and quality at work.

He let built a school for his employees where they could learn not only how to make shoes but the economy, marketing, etc. as well. He started to promote his shoes in a modern way. He was the first who used the slogan „Our customer – our lord“. His shoes were called „baťovky“ and his prices „baťa prices“ – they always ended with 9 (199, 399, 999 Kč…). He built the first shopping center in Czechoslovakia – you can still visit it in Wenceslas Square in Prague. And the first Czechoslovak „skyscraper“ in Zlín (imagine that Baťa had his office in the skyscraper´s lift!).

He loved technological innovations. His property was huge, he owned various companies, shops, an aircraft company, forests, land… in Czechoslovakia and abroad, too. Zlín town was completely changed, he invited architects to prepare its modern form.

In 1932, Tomáš Baťa died and his step-brother Jan Antonín run the company. It kept growing, not only shoes but tires, bikes, artificial fibers, or planes were produced. Before world war II, Baťa sold more than 60 million shoe pairs in the world. Of all shoes made in Czechoslovakia, 88 % were made by Baťa.

At the beginning of the war, Baťa left the country because of the Nazis and moved to Brasil. Zlín´s company kept running under control of four Czech managers nominated by Baťa

After the war in Czechoslovakia, the communist era started and the governement put all private companies under state control. (More about the communist revolution in CSR.) Communists took also Baťa´s company and transform it into a state factory. Not only in Czechoslovakia but in all European communist countries. The Baťa family split up: Jan A. Baťa left for Brasil, built cities, made shoes, and made his business in agriculture there. The second half of the family, Tomáš Baťa junior, left to Canada and kept going shoe production and development of Baťa´s company there. Today, it sells shoes in more than 70 countries.

Up to the present day

After 1989, Baťa shoes came back to Czechoslovakia. A university using Tomáš Baťa name was founded in Zlín. The university made a great webpage about Baťa – have a look at excellent pictures of company history.  You can visit Baťa´s museum in Zlín, too (excursions in Czech, English, German).  Have you already been to Zlín?

You can read more about the history of the Baťa company.

Practice listening as well. In this audio, you learn a lot about architecture in Zlín and Baťa company. (audio: 3:47)

Baťa is a real phenomenon in Czechia. On the internet, you can find a lot of materials, you can read, listen to audiobooks… Do you have any of Baťa shoes?

This article in the Czech language

Want to join the discussion?
Feel free to contribute!